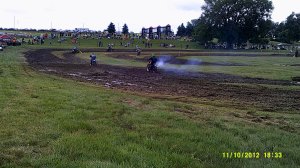 We woke up Saturday morning, day 4, to cloudy and humid conditions. About an hour later the rain started, slowly at first, then building to a full fledged downpour that lasted about a half hour. We were wandering through the swap meet area and took refuge under an awning by the main showers with a few other guys. After it was done raining, the heavy stuff anyway, we slogged our way over to the MX track as they were just getting underway with the first motos. That was a sloppy mess as most of the bikes got drowned out or stuck on the first couple laps. The ruts were becoming a problem and the greasy muck robbed major horsepower from the smaller bikes. We watched for a while, dodging rainshowers most of the time then wandered back to our campsite. I found out my tent is not waterproof as advertized. Luckily, I had put my sleeping bag and clothes on top of the air mattress and so the important things were still dry but there was a large puddle in the tent that I had to bail out, and my shoes were soaked through. We faired better than the neighbors as they had a small river running right through their campsite. When all the rains stopped somebody said we had received an inch and a half. I believed it, too. Our two Gold Wing riding buddies from Kentucky had pulled out before the heavy rains started. I’m pretty sure they got soaked not too far down the road. We got to know our other neighbors that evening, a BMW rider from Indiana and an older gentleman from Michigan who rode a Suzuki V-Strom 650. Then we hit the sack at about 9:30, just as it was getting dark. Sleep was not easy to come by with all the rowdies shooting off bottle rockets and revving their bikes til the wee hours in the morning, however.

We left Muskegon, MI about 8am in the heat. Heading south and east through Michigan farm country. The heat kept building all day and as we approached Mansfield, Ohio I could see that the road had a wet look to it. The temperature really started to drop at that point which felt really good! Apparently, we had just missed a small thunderstorm that had moved through the area. We arrived at the track/swap meet area about 3:30pm local time and set up our tents. This would be our basecamp for the next two and one half days. Our neighbors next door were a couple of Gold Wing riding brothers from Kentucky that were the same age we are and we spent a couple hours that night entertaining each other with stories about growing up riding motorcycles and the shennigans that came with it. More to come.

So day one was just me riding to my brothers place in Cadott, Wisconsin. I left my place at about 2pm in the heat, stopping once in Durand for a water and cracker break. They were nice enough to let me crash in their air conditioned spare bedroom for the night. The next morning we headed out early for Manitowoc. We arrived a bit early and had about an hour and a half to kill. We met a couple of other riders who happened to be brothers as well, but were a bit older (mid sixties) traveling back home to Pennsylvania. It was a good way to kill some time while we waited, swapping stories and finding out a bit about their trip as well. The ferry ride lasted four hours but it took an hour to load and another hour to unload the boat. A good way to travel if you are not in any hurry. It was a hot day but once out on the lake became quite breezy on the boat. If it would have been any cooler the breeze would have been a bit chilly. After departing in Ludington, Michigan, we rode south for an hour to Muskegon and had some pizza for supper and then found a motel and crashed for the night. More to come.

Soon I will be heading off on my little motorcycle adventure to Mid-Ohio for the annual Vintage Motorcycle days. The first leg of my journey will be to my brothers place in Cadott, Wisconsin. From there the two of us will travel to the far eastern edge of Wisconsin and board the ferry that will take us across Lake Michigan, a five hour jaunt all by itself. The main purpose of this trip will be the celebration of forty years of motorcycle riding. But, as an added bonus, we will be riding to a place awash in vintage motorcycle buffs, just like us. There we will do the swap meet shuffle for a couple of days in search of rusty gold, sleep under the stars, and endure a cold shower or two.
There are just a few more details left for me to take care of. I need to mount a new front tire on the big ST and change the oil. Maybe new spark plugs if time allows. Then I’ll pack the trailer and make sure it is not loaded too heavy. After all is ready, I’ll give my wife some final instructions, a big kiss and then hit the dusty road outa here. Pics will follow after we return, victorious, and with many a tall tale to tell. Stay tuned.