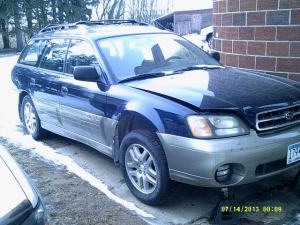 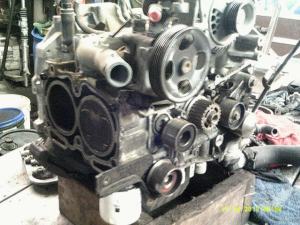 So here’s the scoop on my latest project. I was in Zumbrota at the NAPA store one day back in early October when I just happened to look out the window and see this car go by on a flatbed owned by Bergs Towing. Being that it was a Subaru Outback, no less, really got my attention. When I was done with my business at the parts store I wandered down to Bergs place, since it was only a couple blocks away. They were just unloading the car and the owner was standing there, looking a bit forlorn. After quizzing him a bit, I found out his story. He was from Iowa, down by Decorah, I think. He had been in Wisconsin on a sight seeing trip and was on his way home when his 2000 Subaru Outback died on the highway right by Zumbrota. I asked the mechanic, Roger, to try starting the car. His attempt left little doubt that there was a serious lack of compression as the engine would spin right over. Next, I asked if he would take off the plastic timing belt cover on the front of the engine to have a look at the timing belt. There were only three bolts holding it on and so he complied. Upon removal of the cover, it was apparent that the timing belt was quite loose on the pulley. Not a good sign. This engine was not going to run anytime soon. I told the owner that he might find a used engine to put in the car, wished him luck and left for home. I didn’t give him my phone number or bug him about selling the car or anything, I just walked away. End of story, right? Not exactly. Not by a long shot.
The very next morning, my phone rang. It was the owner of that Subaru Outback and he wanted to know if I would be interested in buying it. Bergs had quoted him a price of two thousand for a used engine and installation. He wasn’t prepared to spend that kind of money on it so he was in a selling mood. I told him yes, but I would like to know how much he wanted for the car. He didn’t know. So I made him an offer of five hundred dollars. You could have heard a pin drop on the other end of the line. He then proceeded to tell me how he had just put two new tires on the front and also both front drive shafts back in September, to the tune of six hundred bucks. Then he wanted to know if I could go any higher. I told him, probably not. He told me he had one other guy he would check with to see if he wanted it and he would let me know, then hung up. I didn’t hold out much hope, at that point, because surely this other guy would want it bad enough to cough up more than what I had offered him.
A week went by. I had just about given up on the guy when he called back out of the blue. Seems that his other guy was in Iowa and would have to arrange to have the car hauled back there and didn’t really want it that bad and was I still interested? I told him yes but I would be sticking to my original offer of five hundred. After a bit of hemming and hawing, he agreed. We set up a meeting for a couple of days later to transfer the title and make the purchase.
We met on the following Friday. The sale went just fine. I handed him the cash and he signed over the title. We chatted a bit about the car. He had planned on keeping it for another three or four years until this episode happened. I checked the odometer to find nearly two hundred twenty thou showing. That seemed a bit high but he assured me everything besides the engine was in working order, brakes, tires and even the AWD option. Bergs Towing brought the car out to my place a couple days later. It sat in the yard for a week before I got around to pulling the engine out. It is possible to pull the heads off of these Subarus in the frame but it is much easier to work on the engine when it is sitting on the bench. I always prefer working on a project like this in a nice warm shop with warm wrenches handy.
Once the engine was out I started the diagnosis. After removing the front timing belt cover the damage and its cause was readily apparent. One of the idler pulleys for the timing belt had a bearing that seized up, causing the pulley to stop turning and snapping the bolt that held it on. When that happened the idler was free to rattle around in the timing cover and chewed a nice hole in it. The timing belt was no longer tight at that point so it skipped a few teeth on the cam sprockets, bending every valve in the engine before it quit spinning. Removal of the heads revealed the bent valves but luckily, the pistons were not damaged. It could have been worse, I guess, but at this point I am looking at a full cylinder head rebuild, top end gasket set, water pump, idler pulleys and timing belt kit. I have found the parts on Epay and the grand total looks to be about three and a half bills. Add a few incidentals like four quarts of Amzoils’ finest, some cool-aid and a new timing belt cover and I should be looking at a little over four bills. Labor is free on a project like this, naturally. My next move is to finance this little project so I can get it running before too long. I will keep you updated on its’ progress.