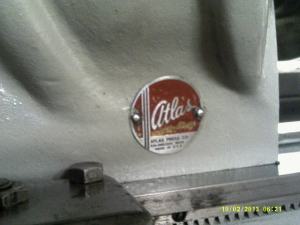 Well, here’s the story. I bought this piece of equipment in April of ’82. My son was born in July of that year so I have had it longer than him. The previous owner told me his dad owned it and when he passed away it was acquired by him. He was not sure of the year of manufacture but thought it was made in the ’40s, probably. Over the years it has turned countless numbers of cylinder bores, starter armatures, bushings and a myriad of parts for my inventions and creations. I’m pretty sure I recovered my investment of $250.00, after thirty three years. When I bought my new, bigger Jet lathe in ’97 it got used a lot less. I let dad use it for a while until he left the crossfeed engaged too long and it ran out of travel, wrecking some of the leadscrew gears in the process. I found all the parts on Epay years ago and finally got around to fixing it this past winter. After starting on the project, I figured I may as well go ahead and repaint/restore the beast while I was at it. So here is the finished product. What’s next for the old girl, you ask? I just gave it to my son last week so he can play with it. Might as well let him have it, seeing as how he grew up watching me use it.