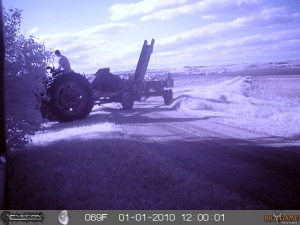 So a picture is worth a thousand words or so they say. The field in the background holds the key to this mystery. Last fall we had that terrific windstorm with lots of tree damage at our place. This field is on top of the hill behind our farm. The neighbor farms it and had a pretty good crop of corn growing there. That is, until the storm in September blew through and mashed alot of it down. To me it looked like a bulldozer had run amok and flattened large areas of the cornfield. Due to weather and health concerns the farmer did not get a chance to harvest til early winter.
By then the snow was flying and he had limited success in getting the crop off. There were large areas that had row after row of downed corn that his combine missed or knocked flat completely. This bothered me a bit as we use corn as a fuel in our three cornstoves to heat this old barn that we live in. And being a cheap guy at that, I’m always on the lookout for a load of free corn. When I saw on the news that a semi hauling corn had tipped over in the roundabout in Zumbrota recently, I just about wet my pants. To see half of this field of corn just laying there was an invitation to me.
I speculated that with Ol’ Bessie and my one row corn picker I may just be able to harvest some of that downed corn to use for heat. After talking with the farmer and asking permission he was more than happy to allow me to go ahead with my plan.
The weather this spring has not been the best for fieldwork until lately. So this past weekend I put my plan into action. I was able to pick three wagonloads and then shell it all into my special gravity box wagon with the roof on it. While I was picking, my other neighbor to the south was out in the adjacent field spreading manure. He was doing a whole lot of gawking at me while he did. Funny, but when I told my wife about him all she said was, “Well you do have that affect on people.” Touche’ I guess.
Picking was a slow process, but then again anytime you use a one row picker you can expect progress to be slow. Still, its a lot better than picking by hand, which I have done as well. There were large areas that the snowpack had flattened to the ground and my picker was no good at lifting that up. There were also many rows that were bent over but the corn was still up off the ground somewhat and that was the stuff I went after. There is still alot out there but time may not be on my side. At some point the farmer will be out there tilling the stalks under, and with it all that dry corn. If it works out I may try picking again. I will keep you posted and that’s the end of the mystery.

One thought on “May Corn Pickin’”